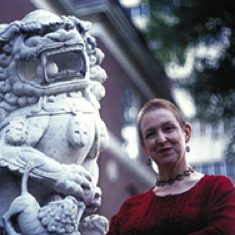 Linda Barnes is a medical anthropologist and a scholar in the study of world  religions. She is a Professor of Family Medicine at Boston University School of Medicine (BUSM), and in the  Division of Religious and Theological Studies in the Graduate School of Arts and Sciences at Boston University. Her research and teaching interests address the intersections of cultural, religious and therapeutic pluralism, particularly in the United States. She is committed to including an understanding of the healing practices of culturally complex patient populations in the training of researchers and clinicians, and to helping both to better understand how religious worldviews play a part in patient and family understandings of illness and healing. As a historian and medical anthropologist, her  research expertise addresses the cultural and social history of Western responses to Chinese healing traditions, in relation to histories of race, medicine, and religion.

Dr. Barnes received her B.A. from Smith College, following which she earned her Masters in Theological Studies (M.T.S.) at Harvard Divinity School, and her M.A. and Ph.D. from Harvard University in Comparative Religion and the allied field of Medical Anthropology. Prior to coming to BUSM, she taught courses on religiously grounded healing traditions at Harvard University, Harvard Divinity School, Brown University, and Northeastern University, and has received multiple teaching awards for her work with students. For ten years, Dr. Barnes served as the consultant to faculty-development workshops, sponsored by the American Academy of Religion (AAR) and funded by the Lilly Endowment, the Luce Foundation, and the National Endowment for the Humanities, for faculty in the study of religion. She also served as the Regional Director of the New England/Maritimes Region of the American Academy of Religion, and a member of the AAR Board of Directors, from 2002-2008. She founded the “Religions, Medicines, and Healing Group” program unit of the AAR in 2002, and served as co-chair until 2010, when she moved to the group’s Steering Committee. Since 1999, she has been a member of the faculty of Boston University School of Medicine, where she founded and directs an urban ethnographic program—the Boston Healing Landscape Project (BHLP), a program for the study of religions, medicines, and healing—funded three times by the Ford Foundation between 2000 and 2008. The BHLP’s research has focused on forms of complementary and alternative medicine common among the culturally complex patient communities served by the medical school’s teaching hospital Boston Medical Center (BMC). In 2009, Dr. Barnes and Dr. Lance Laird founded the Masters of Arts Program in Medical Anthropology & Cross-Cultural Practice (now a Masters of Science), based in the Division of Graduate Medical Sciences at Boston University School of Medicine.

Dr. Barnes has published her ethnographic work in leading medical anthropology journals such as Culture, Medicine & Psychiatry, Medical Anthropology, Medical Anthropology Quarterly, and Social, Science and Medicine. Her books include Religion and Healing in America (co-edited with Susan S. Sered, Oxford University, 2005); and Teaching Religion and Healing (co-edited with Ines Talamantez, Oxford University, 2006). Her historical scholarship appears in her books Needles, Herbs, Gods, and Ghosts: China, Healing, and the West to 1848 (Harvard University Press, 2005) and Chinese Medicine and Healing: An Illustrated History (co-edited with TJ Hinrichs, Harvard University, 2012). She has also written “New Geographies of Religion and Healing: States of the Field,” a monograph on the state of the history and more recent developments in this interdisciplinary area of study. She is currently writing a book on the cultural and social history of Chinese medicine and healing traditions in the United States, beginning in 1849 and continuing up through the present. As part of this project, Dr. Barnes has conducted fieldwork and gathered oral histories in regions throughout the United States.

Dr. Barnes’s expertise in the field of Chinese medicine in the U.S. has resulted in her being invited to speak to local, national, and international audiences. She has served as an expert reviewer for the National Institutes of Health’s National Center for Complementary and Alternative Medicine. Dr. Barnes lives with her husband, two parrots, cat, and their dog in Cambridge, Massachusetts.

Listen to an interview with TJ Hinrichs and Linda Barnes  about their edited work Chinese Medicine and Healing: An Illustrated History, on the New Books in East Asian Studies podcast

Ready to learn more about a program? Complete this inquiry form to get in touch with an admissions advisor!