Laboratory for Molecular Psychiatry in Aging 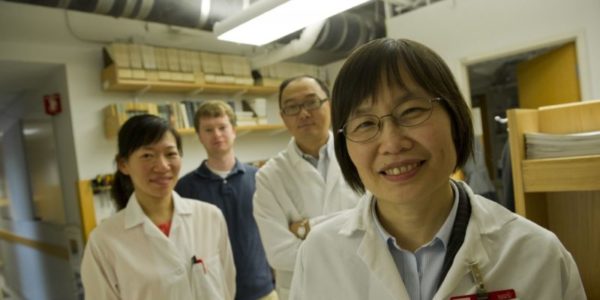 Using a homebound elderly population and the application of the modern technologies, including molecular biology, cell biology, and molecular imaging, the Laboratory of Molecular Psychiatry in Aging’s research goal is to study the pathophysiology underlying the preclinical stage and development of neurodegenerative diseases, especially Alzheimer’s disease (AD).

The homebound elderly suffer from a multitude of medical and psychiatric illnesses, including type 2 diabetes, late life depression, and Alzheimer’s disease (AD) (Qiu et al. 2010). Diseases in the elderly often co-exist, one disease may have manifestations in multiple organs, or one disease may lead to the development of another disease. Thus, the homebound elderly population is unique in studying the interaction between diseases in peripheral organs and the brain because of the high percentage of co-existing diseases.

Our laboratory is especially interested in studying late life depression and type 2 diabetes. As the elderly population ages, we urgently need tests which are simple, noninvasive, sensitive, and specific to identifying individuals who are at an increased risk for AD, such as the blood cholesterol test for atherosclerotic diseases. There are currently no blood tests used to screen for the risk of AD, nor any treatments to delay AD progression. With respect to disease research, when following this established cohort population of homebound elderly, it is important to identify the biomarkers, modifiable and nonmodifiable factors, and to understand how mutations of the genes interact with the environment to cause diseases in the elderly.

The Laboratory of Molecular Psychiatry in Aging is led by Dr. Wendy Qiu, a practicing physician-scientist and Associate Professor in the Psychiatry, Pharmacology & Experimental Therapeutics, and Alzheimer’s Disease Center (ADC) at BUSM. She is also a faculty member in the Neuroscience Program at BU. The members of Dr. Qiu’s team share the goal of working on pathological questions related to research in geriatric psychiatry and also believe in making their lab a collegial, stimulating, and fun place to work.

For more information, please visit the Laboratory for Molecular Psychiatry in Aging.