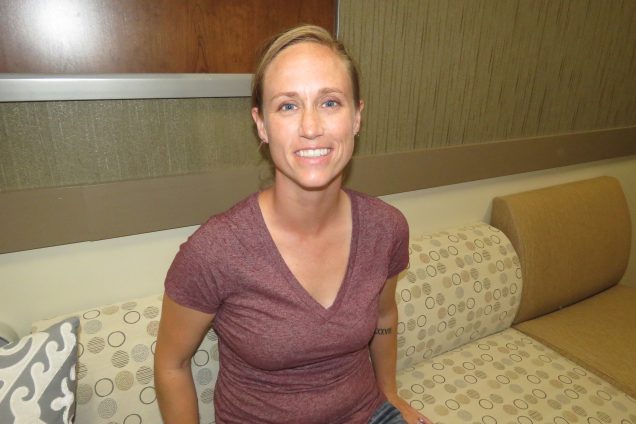 Christina (Tina) Lisk joined the Program in Biomedical Sciences (PiBS) umbrella PhD program in the fall of 2015 and joined the molecular and translational medicine (MTM) program for her dissertation research. She decided to make the transition to graduate school after working in the pulmonary division of the department of medicine at University of Colorado Anchutz Medical Campus. There, she focused on pulmonary hypertension complications from exposure to hemoglobin. After 5 years in the pulmonary division and two first author papers, she decided to attend Boston University for graduate school. She was a student-athlete in her undergraduate studies at the College of St. Benedict in central Minnesota, where she received her Bachelor of Arts in Biology. While studying science has always been a passion for her, she also likes to remind everyone of work/life balance which she maintains by running marathons and having a dog to come home to after lab.

When did you realize that you wanted to pursue a career in science and why?

I graduated from a small school in Central Minnesota and studied biology up there and got to play soccer, which is one of the reasons I chose the school. I graduated in 2009, which was kind of the middle of the recession, so I worked as a cook with my degree and worked for free at the University of Denver Medical Campus as a tech. It was through that – figuring out how all the puzzles fit together as a tech – that I really, really started to enjoy it. I went through the routes there as high as I could go, I got to travel a lot to go to different conferences (which was cool). Then I realized I loved immunology and that I wanted to go back to graduate school and figure out as much as I could about immunology.

You were out of school for a while before you came to the PiBS program. How as that transition?

It was hard, to say the least. I was used to being in a lab, I knew what lab work entailed, I knew that there were days that would take 14 hours, I knew there were days that would take 5. Graduate school and coming back is 14 hours every day. You have to learn how to write again, how to learn again; it’s a different process from undergrad. You don’t necessarily have a test at the end of the semester or end of the unit, so it really pushed me in different ways, academically, than what I was ready for. But I feel like I pulled it out OK.

Can you tell us a little bit about your dissertation research?

The reason I chose this lab, coming back from immunology and having worked with vaccine development for the past 20 years, is because Lee [Wetzler]’s lab specifically looks at Toll-like receptor adjuvants. The reason I chose his lab is to learn immunology as much as I could. So, what I’m looking at is knocking down a specific subset of macrophages and how that influences antibody production.

What advice would you give a first year PhD student trying to identify a laboratory to carry out their research?

I definitely focused on subject, whereas the advice I got from others was to focus on lab environment, so I tried to find a good balance between those two. I really wanted to join Molecular and Translation Medicine, not so much Microbiology, and for immunology that was a bit more difficult. Lee’s lab fit that really well and, at that time, we had a postdoc who I really enjoyed, as well as another graduate student who I really enjoyed. All of this in combination, you just take it in and does it feel right?

Can you tell me about an interesting experience you’ve had while in graduate school?

Honestly the people here. That includes your peers, the students and faculty. I think they genuinely believe in you, want to see you succeed, but they’re almost like parents in the aspect that they’re going to push you. I was in the second group of PiBS students to come through, and the growth this program has gone through has been really cool to be a part of and see.

What’s the most surprising thing that you’ve learned about yourself as a graduate student?

How well I can time-manage and what I can get accomplished in 5 years. I think I’ve been able to travel a fair amount with some of my friends just the way situations have worked out financially; I’ve gone to two international conferences that I have won awards for. I have a sister in New York City, so I’ve gotten to do a lot of the East Coast stuff that I didn’t necessarily think I would have time for while doing my dissertation.

I also have a dog. He’s a hot mess but he’s adorable. I adopted him when he was 3 years old and he definitely has protective issues. I’ve never had a problem with him but he’s a Wheaton Terrier, about 40 lbs. We go running together and Terriers are just the best. They’re just so sweet and it’s the best to come home to.

Now that you’re getting close to defending your dissertation, what’s next?

I have a postdoc position at National Jewish Hospital in Denver. I worked in Pulmonary at UC Denver for 5 years, and then here for immunology for 5 years, and National Jewish is specifically for pulmonary and immunology. I’ll be looking at human macrophages, alveolar macrophages that we isolate, and the genes that are involved for different disease processes. And I’m getting married. My fiancé lives in Denver and she and I have been suffering through a long distance relationship and both of us are very excited for that to end.

Lots of things! I’m a huge Liverpool Football Club supporter. They’ve won championships this year so it’s been a great year to be a supporter. I watch a lot of those games. I run a lot. I ran two marathons in grad school – New York City and Acadia. I hang out with the dog. I travel – either seeing my sister or my parents in Denver. Went to California and I did Napa with my family. Family is huge on my list, so whatever I can do to see them. And then I hang out with my friends. There’s a lot of cool breweries downtown that we get to go to, like Backlash, which is right around the corner.