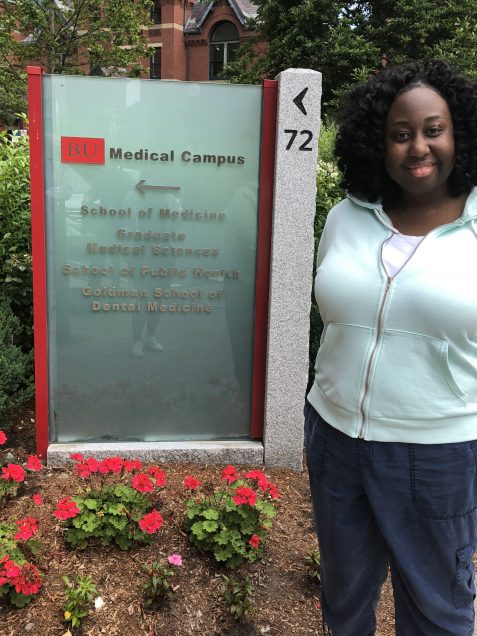 Keshia entered the Program in Biomedical Science (PiBS) in the fall of 2017 and then joined the Molecular Translational Medicine program for her dissertation research. She’s from New York, and attended St. John’s University in Queens for her undergraduate education, where she studied biology and worked in an undergraduate research lab centered on DNA nanotechnology, with a focus on a technique known as DNA origami: nanoscale folding of DNA to make two and three-dimensional shapes. She then went on to apply to graduate school, ultimately choosing Boston University for her PhD studies.

Growing up, what did you want to be and how did that evolve into what you are currently doing?

I always wanted to be a medical doctor because I liked the idea of helping people. That didn’t change for me until I started to think about applying for the MCAT and worked in the cancer ward of a hospital for four months. I really didn’t like it – I underestimated how emotionally stressful being an MD is. Everyone you’re seeing is sick and might or might not get better, plus having to deal with the family’s understandable but heightened emotions. It was all overstimulating for me and made me reevaluate: “I’m still interested in science, I’m still interested in helping people, but is there a way I can do that that’s less emotionally draining for me?” I hadn’t known what grad school really entailed until I started looking into it and finding out about great opportunities to not only research but to teach if you want to. Realizing there were more options than just industry or academia made me interested.

What unexpected challenges have you faced as a graduate student and how’d you overcome them?

Imposter syndrome has been the biggest one: worrying about whether or not I belong here or about whether my work is interesting or good enough. Dealing with it means confronting and trying to fix what makes it worse. For example, reconnecting with friends and making sure I’m socializing with people in person or by text every day is important and helps with those feelings. Seeing that I’m excited about their work and they’re excited about mine makes me better feel like I belong here, as well as realizing that not seeing what the committee saw in me to admit me is doing them a disservice.

What’s the most exciting thing that you’ve done as a graduate student, whether it be personally or in the lab?

Getting to know a new crop of people outside of a science context and exploring the city have both been very exciting, especially as Boston is still relatively new for me – my interview weekend was the first weekend I was here. In the years before grad school I was more isolated and unsure of what I wanted to do with my life, and I hadn’t realized how much I missed having company and being in a vibrant social space until I came here.

In terms of science, I wasn’t expecting to do cancer research – I was aiming more for transplant-relevant medicine; it’s what I wrote my personal statement on. I hadn’t realized how complex cancer was or how many different angles there could be to approaching the same problem. Finding my own niche in that space and then trying to connect it to other things I’m interested in like immunology and stem cells has been invigorating for me.

What advice would you give a first year graduate student who’s just starting the program?

Ask for help! I was so embarrassed whenever I needed help with anything, because it felt like validation to the voice saying “You don’t belong here. Everyone else is doing perfectly fine and you’re the only one struggling.” That wasn’t true at all: just because other people aren’t vocal about their difficulties doesn’t mean that don’t exist. You shouldn’t feel like the lone failure adrift in a sea of people passing everything with flying colors. This program is very difficult and very intensive, and people recognize that – you aren’t going to be shamed here for needing academic or emotional help to cope with it. BU is one of the kindest institutions I’ve ever visited or been a part of; everyone’s genuinely interested in making sure that you succeed. Don’t isolate yourself with your feelings until they become too much to handle.

The other piece of advice I would give is not to compete about anything. I feel like grade obsession is something that you see more in students coming straight from undergrad as opposed to students with more life experience – getting hung up on GPA and on “what did you get on this assignment?” It doesn’t really matter. Don’t fixate on those kind of markers, because understanding the material to later apply it like a scientist is the most important thing. Additionally, a lot of academic culture is highly toxic in making not taking care of yourself a point of competitive pride. You should not feel like you’re not doing enough if you’re getting adequate sleep, and you are not more undeserving of success than your classmates if you make time for hobbies or refuse to pull constant twelve-hour lab days. You’re human. Go take a nap.

What do you do for fun?

I’m a huge nerd! I play video games, and I got into Dungeons and Dragons last year. It was a really old-school tabletop game that’s experienced a resurgence in the last 10 years, so there’s a pretty vibrant community around it now. It’s been nice to go out on a weekend, roll some dice, and tell some stories with friends – decompress and have a good time. If you can find a table of people to play with, I highly recommend it! I also enjoy creative writing.

What is your favorite restaurant or thing to do in Boston?

I like the [Boston] Commons in spring – it’s really soothing to walk through. My favorite restaurant is a tie between two: one is an Italian place called Papa Razzi on Newbury Street. That place is mind-blowing – everything is home made, and the flavors…it’s one of my favorites. The other is a hot pot in Chinatown called Kaze Shabu Shabu. I always get the curry broth!