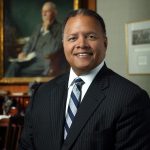 On Friday, November 19, the Department of Surgery will be hosting its inaugural Diversity, Equity & Inclusion Visiting Professorship. We are excited to have internationally renowned heart-lung transplant surgeon Dr. Robert Higgins as our visiting professor. Surgeon-in-chief at Johns Hopkins Hospital, Dr. Higgins is the William Halstead Professor of Surgery and director of the Department of Surgery at Johns Hopkins University School of Medicine, where he is also senior associate dean for diversity and inclusion. He is the first Black physician to chair any department in the School of Medicine at Johns Hopkins. As of December 2021, Dr. Higgins will take on a new role as president of Brigham and Women’s Hospital and executive vice president at Mass General Brigham.

Events will be in-person and Zoom

Dr. Higgins is a leading authority in the field of heart and lung transplantation and coronary artery bypass surgery. His scientific interests are broad and far-ranging and include health economics and policy, competency-based residency training, and racial disparities in post-transplant outcomes.

Since 2015, he has been surgeon-in-chief at Johns Hopkins Hospital, the William Stewart Halstead Professor of Surgery, and director of the Department of Surgery at Johns Hopkins University School of Medicine. In 2020, he was also appointed senior associate dean for diversity and inclusion for the School of Medicine. He is the first Black physician to chair any department in the school. As of December 2021, he will take on a new role when he becomes president of Brigham and Women’s Hospital and executive vice president at Mass General Brigham.

After earning his bachelor’s degree from Dartmouth College, Dr. Higgins received his medical degree from the Yale School of Medicine, and later, a master’s degree in health services administration from Virginia Commonwealth University. He completed residency in general surgery and served as chief resident at the University Hospitals of Pittsburgh. Dr. Higgins was a Winchester Scholar and fellow in cardiothoracic surgery at the Yale School of Medicine, and a senior registrar in transplantation at the renowned Papworth Hospital, the U.K.’s largest cardiothoracic surgical program and its main heart-lung transplant center.

Dr. Higgins came to Johns Hopkins from The Ohio State University, where he was professor and chair of the Department of Surgery, as well as surgeon-in-chief and director of the Comprehensive Transplant Center at Wexner Medical Center. He began his surgical career in 1993 at Henry Ford Hospital and as an assistant professor of cardiothoracic surgery at Case Western Reserve University. After directing cardiothoracic transplantation programs at Henry Ford and Children’s Hospital of Michigan, he went on to chair the Division of Cardiothoracic Surgery at the Medical College of Virginia. In 2003, he was appointed chair of the Department of Cardiovascular-Thoracic Surgery at Rush University Medical Center, and in 2010, joined the the faculty at Ohio State. In addition, for 13 years, he served as a Major in the United States Army Reserve Medical Corps.