The Peter J. Mozden, MD, Visiting Professorship in Surgical Oncology was established in 1989 to honor Dr. Mozden’s many contributions.

Dr. Peter J. Mozden began his long and illustrious career at Boston University in 1949 upon entering the medical school.  He subsequently completed a surgery residency at the Massachusetts Memorial Hospital.  During his residency, he completed a physiology and pharmacology research fellowship with the U.S. Public Health Service.  Shortly thereafter, he became an NIH cancer fellow at the Pondville Hospital in southeastern Massachusetts.

Dr. Mozden returned to Boston University in 1960, working closely with Dr. Langdon Parsons in gynecologic oncology.  He embarked upon visionary care of the cancer patient, advocating for a multidisciplinary approach to training for surgical and medical oncologists, the development of Surgical Oncology as a subspecialty, and the importance of cancer education for students, residents, and faculty.

In 1964, Dr. Mozden established the first Section of Surgical Oncology in the United States, at University Hospital.  This was followed within a year by the development of an NIH-supported Oncology Fellowship Program that provided training for 38 fellows over the subsequent 22 years.  Dr. Mozden established the first Regional Oncology Program, linking 24 New England hospitals, and the first clinical cancer unit outside of a cancer center, at the University Hospital.

During his career, Dr. Mozden served as principal investigator of the Boston University Cancer Education Grant, through which over 400 medical students received specialized clinical oncology or research experience.  Dr. Mozden received national recognition for his expertise and achievements in the field of cancer education.  During his long career at Boston University, Dr. Mozden secured over $8 million dollars in grants, donations and gifts to the institution.  He served as Chair of the Department of Surgery from 1984-1985.

Dr. Mozden was a member of over 20 societies, an officer in many, and a founding member and President of the American Association of Cancer Education.  He was a physician advisor to President Nixon for the development of the National Cancer Act in 1972.  He authored numerous journal articles and book chapters, and produced an award-winning three-hour PBS documentary portraying a young woman’s affliction with ovarian cancer.

In 1989 Dr. Mozden became Professor Emeritus.  That year marked the first Peter J. Mozden Visiting Professorship in Surgical Oncology, established to honor his many contributions to Surgical Oncology and patient care.  Through his presence and thoughtful guidance, he continued to support cancer education at the Boston University Chobanian & Avedisian School of Medicine until his death in January 2011.

Click here or on the photo below to read an article about Dr. Mozden, which appeared in the Fall 2013 edition of Boston University Chobanian & Avedisian School of Medicine Campus & Alumni News. 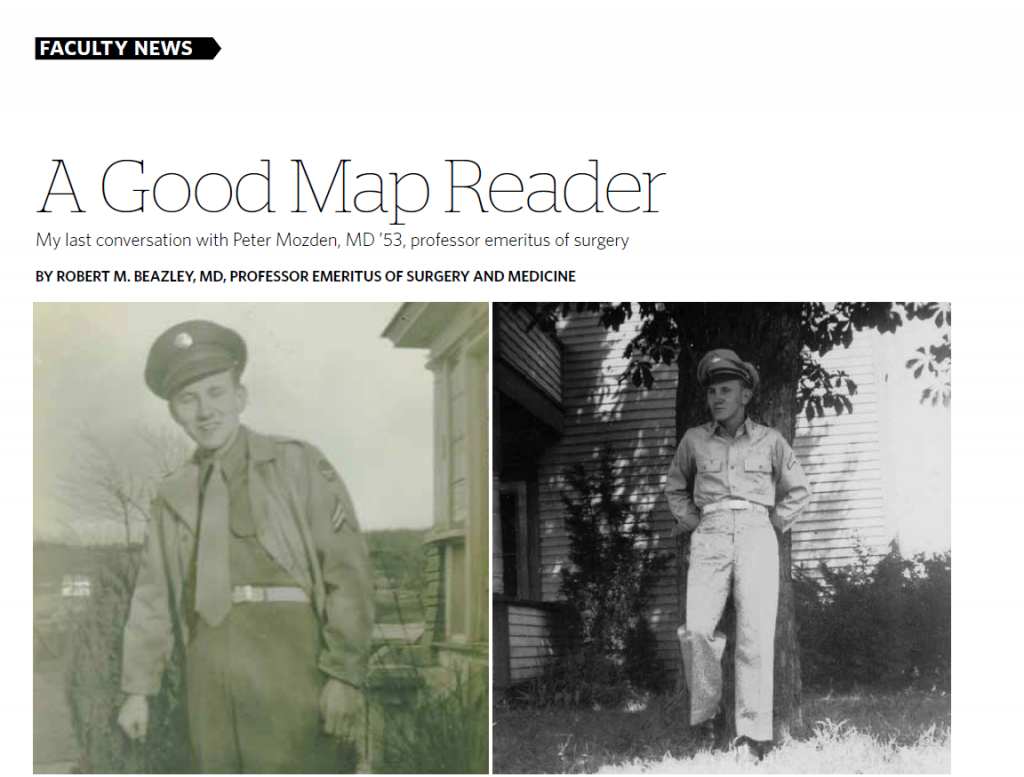