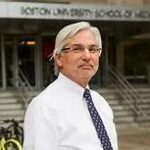 His own laboratory is interested in two major themes which revolve around roles for Interleukin-16, co-discovered with Bill Cruikshank in 1982. The first theme relates to the functions of IL-16 as a immunomodulatory cytokine. Over the past several years, in collaboration with Bill Cruikshank, he has studied the role of IL-16 in recruitment and development of Regulatory T cells and demonstrated that it plays a key role in tolerance to airborne allergens. Utilizing transgenic knockout and overexpressing mice his laboratory is involved in demonstrating the patterns of CD4+ T cell trafficking through lymph nodes and lung parenchymal in normal and immunologically challenged lungs and identifying potential therapeutic implications of altering recruitment patterns of Regulatory T cells.

The second major emphasis of his laboratory relates to the functional properties of the precursor protein for IL-16, Pro-IL-16 as a tumor suppressor gene. In these studies, along with Yujun Zhang he has shown that Interleukin-16 is synthesized as a precursor which is present in cytoplasm and nucleus of resting T cells. It contains a phosphorylation regulated nuclear localization motif and binds a nuclear chaperone hsc70 which is essential for transport to the nucleus where its presence induces arrest of the cell cycle at G0/G1. It inhibits the cell cycle by acting as a scaffolding protein that assembles a histone deacetylase complex targeted via binding to GA-BP to the Skp2 promoter using intermolecular PDZ binding motifs. Skp2 is an essential member of the ubiquitin ligase protein degradation pathway responsive for degrading the cell cycle cyclin dependent kinase inhibitor p27. In the presence of pro-IL-16, the complex inhibits Skp2 transcription, which in turn decreases p27 degradation resulting in rises in p27 levels and arrest of the cell cycle in G1. Current studies are directed at identifying mutations in Pro-IL-16 that predispose to T cell malignancies and determining its role is permissive exit from G1 in normal T cell activation and proliferation following antigen stimulation.

Our Pulmonary Center community is heartbroken by the loss of Jerry Brody,

This project developed to address limitations in our understanding of the genetic...