Directed by Wellington V. Cardoso, MD, PhD, the Lung Developmental Biology Program at the Boston University Pulmonary Center focuses on the study of developmental mechanisms from specification of lung progenitors and the emergence of the lung primordium to perinatal events that result in formation of the airways and alveoli. The Program congregates a highly interactive group of investigators with accumulated knowledge in lung morphogenesis and stem cell biology. The overall research goals are to elucidate the properties and fates of progenitor cells of the developing lung, to develop tools for their characterization, to understand how cell fate and morphogenesis are coupled and the genetic and epigenetic mechanisms that control these processes. There is increasing evidence of the involvement of developmental signals in disease conditions, such as pulmonary fibrosis and lung cancer. Our studies provide insights into the molecular mechanisms associated with aberrant responses of the lung in injury-repair processes and help understanding potential regenerative capacities of the lung. 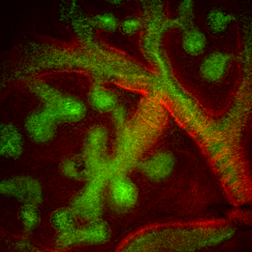 Work on molecular aspects of lung development begun at the Pulmonary Center in 1991 by a group of investigators which has been continuously funded by a Program Project Grant from the National Heart, Lung, and Blood Institute (NHLBI) throughout 2012. In addition, the investigators have been supported by several NHLBI RO1s.from the Parker B. Francis Foundation and other sources. The group meets weekly to discuss research in progress, review recent literature and attend seminars from invited speakers. The group’s research is supported by several shared facilities within the Pulmonary Center and the medical campus. These include a core microscopy and image analysis, with access to confocal and laser capture microscopy and FACS, a gene microarray and bioinformatics facilities, and a mouse genetics core.

The mechanisms responsible for the acquisition of lung cell fate and lung bud initiation from the foregut endoderm are still elusive. To identify candidate regulators of these events we are characterizing global patterns of gene expression in the developing foregut prior to and at the onset of lung development. These studies led to the identification of significant changes in chromatin remodeling and DNA methylation genes at the onset of lung development, which are currently being investigated as putative regulators of early lung development.

We are also investigating the role of specific pathways, such as retinoic acid (RA) in formation of the lung primordium.

By using genetic and pharmacological models of RA deficiency in global gene screenings, we have identified a gene network controlled by RA critical for formation of the primordial lung bud. Ongoing functional analysis shows that this network involves RA control of the Tgf beta pathway and ultimately expression of Fgf10, with the participation of Wnt signaling (Cardoso Lab).

We are employing ES cells or iPS stem cells to model in vitro early lung developmental milestones and learn about signaling cascades required for lung specification (Kotton Lab). We use a variety of culture conditions and genetic manipulation techniques to study the mechanisms that control the differentiation of pluripotent or multipotent cells towards specified endodermal or lung epithelial cell lineages. Ultimately these findings are correlated with in vivo embryonic development in the mouse embryo. In collaboration with other laboratories in the Pulmonary Center (Ramirez Lab) and medical campus (Mostoslavsky Lab http://www.mostoslavskylab.com/), we are primarily focused on the roles of FGF and Wnt signaling pathways as well as epigenetic changes in early lung lineage specification. This research program interacts extensively with the campus-wide Boston University Center for Regenerative Medicine (CReM) www.bumc.bu.edu/stemcells.

MicroRNAs are small regulatory RNAs that modulate gene expression by translational suppression and degradation of their target mRNAs. There is increasing evidence that miRNAs play a major role in the regulation of developmental processes. One of the ongoing projects focuses on the characterization and function of specific miRNAs and their targets in the developing lung during branching morphogenesis. We are currently studying miRNAs that are involved in cell cycle regulation, fibrogenesis of mesenchymal cells, and in Shh or Tgfb signaling pathways in early lung development. We are also working on the functional analysis of the TNRC6 gene family members in lung development by using genetic modified mouse model. (Lu Lab)

Notch control of progenitor cell fate in the airway epithelium:

Airways are lined by a mixture of ciliated, secretory and neuroendocrine cells. We are investigating how lung progenitors give rise to these different cell types during development and how these fates are balanced during lung repair. We are particularly interested in the role of Notch signaling, which we found to be critical for formation of secretory Clara cells and to control ciliated cell differentiation. These studies provide insights into the mechanisms that regulate normal development, as well as the aberrant epithelial differentiation in conditions, such as asthma and chronic obstructive pulmonary disease (COPD) (Cardoso Lab).

We are focused on the events that underlie maturation of the pulmonary artery in late mouse gestation, just prior to birth. This line of investigation includes identification of the smooth muscle progenitor cells and the signals that control their fate. One key signal that we have identified is Notcstrong (Fine Lab).

Little is known about how respiratory progenitors are expanded and patterned into proximal and distal compartments during formation of the lung primordium and initiation of branching. Our studies implicate signaling by Fgf10 and Notch in these events. We have identified novel targets of Fgf10 in the developing lung (Lu Lab, Cardoso Lab). We have recently shown that disruption of Notch signaling dramatically expands the population of distal lung progenitors, altering morphogenetic boundaries and proximal-distal lung patterning. We are further exploring the role of Notch-Jagged-Delta signaling using a combination of mouse genetic models and organ explant cultures. As an extension of these studies, we are assessing Notch-mediated mechanisms of cell fate choice in models of lung injury. (Cardoso Lab)

Acquisition of alveolar type I cell gene expression and flattening

We are interested in studying the molecular mechanisms that underlie flattening of lung alveolar epithelial type I cells during development using in vitro and in vivo models of normal and altered lung epithelial morphogenesis. We are testing the role of genes that regulate cell shape, polarization and cytoskeleton remodeling in type I cell morphogenesis ( Ramirez Lab)

Innervation of the pulmonary tract in development and diseases

Little is known about the neurogenesis in the pulmonary tract and its physiological function. We are investigating the origin of neurons in the trachea and lungs and the signals essential for the establishment of neural innervation. The potential crosstalk between neural and smooth muscle cells and its involvement in pulmonary diseases is also being studied (Ai Lab).

Development of the lung innate immunity

We are investigating the interactions between the developing lung and the developing hematopoietic system. These interactions are necessary for establishing a local and functional innate immune system prior to birth. We hope to elucidate how the embryonic lung locally controls differentiation of myeloid progenitors that we found to be localized to the fetal lung mesenchyme. We are also pursuing studies that will determine how certain distinct classes of hematopoietic cells regulate development of the lung’s arterial system in utero (Fine Lab).