Studies in our lab focus on the mechanisms that regulate the initial stages of development of the respiratory system in the embryo. We are investigating how respiratory progenitor cells give rise to the lung primordium and generate a wide diversity of cell types characteristic of the mature lung. Lung development initiates with the establishment of respiratory cell fate in the foregut endoderm, a process that is associated with the appearance of Titf1 (Thyroid transcription factor 1) in the prospective lung field. This is followed by induction of primary lung buds, branching morphogenesis and establishment of specific cell fates in these primitive airways. We are interested in identifying regulators of these events, particularly the role of retinoids, Fgfs Tgf beta, Notch and Wnts.

We use functional mouse genetic approaches, organ and cell culture, genome wide screen, in situ hybridization and other strategies to study the role of specific pathways in the developmental programs of the lung. This research provides insights into basic mechanisms of lung development, stem cell/progenitor cell biology and mechanisms of repair in the adult lung. Moreover, results from these studies have an impact on the understanding of conditions, such as lung immaturity and hypoplasia and in injury-repair mechanisms in the adult. The developmental abnormalities associated with vitamin A-deficiency are known for decades and include defects in the respiratory system as severe as failure to form both lungs. However, the molecular events controlled by retinoic acid (RA) that lead to induction of the lung primordium are still poorly understood. Our studies reveal that RA signaling is highly active at the onset of lung development. We are using RA reporter (RARElacZ) and RA deficient (Retinaldehyde dehydrogenase-2 -/-) mouse lines, as well as pharmacological inhibitors of RA signaling (BMS493) to identify RA-dependent pathways critical for initiation of lung development. We have recently identified an important role for RA in controlling Tgf beta signaling and Fgf10 expression in the foregut during formation of the lung primordium.

Notch control of progenitor cell fate in the airway epithelium: 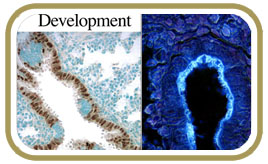 In the normal lung, the airways are lined by a balanced mixture of ciliated, secretory and neuroendocrine cells which perform functions as diverse as air humidification, detoxification, and clearance of environmental particles. How lung progenitors give rise to these cell types and how these fates are balanced in developing airways, remain an open question. By inactivating gene components of the Notch pathway in the mouse lung, we found that airways no longer formed secretory Clara cells and became populated almost exclusively by ciliated cells and neuroendocrine cells. We are currently investigating these mechanisms. These findings provide insights into the regulation of progenitor cell fate that can be criticial in the pathogenesis of conditions, such as asthma and chronic obstructive pulmonary disease (COPD), in which airways have overabundance of secretory cells and paucity of ciliated cells.

Local expression of Fgf10 in the foregut mesoderm is required to activate Fgfr2b signaling in lung epithelial progenitors and form the lung primary buds. Fgf10 null mice form trachea but not the lung. We have been studying mechanisms that regulate Fgf10 expression at the onset of lung development and during branching morphogenesis. We have identified by genome-wide screen and are currently investigating a number of Fgf10 targets, including genes involved in cell rearrangement, cell migration and proliferation, proteolysis and other functions.

Heparan sulfate (HS) proteoglycans modulate the biological activity of a number of growth factors Fgf, Wnt, and Tgf beta in development, homeostasis and cancer. We have been studying the role of HS sulfation mediated by HS 6-O sulfotransferases (Hs6st) in pre- and postnatal lung development. We have developed in vitro models to study how HS modifications influence Fgf signaling and patterning of embryonic lung explants. We also have generated a Hs6st1 knock mouse model for in vivo studies.

Studies in a number of biological systems show that Notch signaling controls cell fate decisions, establishment of asymmetries, and timing of differentiation. We are exploring the role of Notch in the developing respiratory epithelium when the lung primordium forms and branching initiates. Our studies show that Notch signaling is required to balance proximal-distal cell fates and for the establishment of proper morphogenetic boundaries in developing airways.

This year, we kick off fund-raising efforts for the Jerry Brody Endowment.