Boston is known for its academic excellence and renowned medical facilities. Boston has a fine reputation for its cultural and historical attractions, which enhance its high standard of living. It is a city with a diverse population and unique neighborhoods. Each of these neighborhoods reflects a certain culture and history.

Boston Medical Center is located in the South End, and the majority of residents choose to live in this area for both ease of access to the hospital and fantastic cultural and culinary options. The VA has two sites, one in Jamaica Plain (~10 minute drive) and one in West Roxbury (~15-20 minute drive). Boston Children’s Hospital is located in the Longwood/Fenway area (directly next to Beth Israel Deaconess and Brigham and Women’s Hospitals) and is a ~10 minute or less drive away.

South End
The South End is currently undergoing an architectural revival and cultural renaissance. Boston Medical Center is located on the edge of the South End. The South End houses many of Boston’s best, new restaurants. It is home to the Boston Ballet, the Arts Center, jazz clubs and many wonderful stores. The South End was developed in the 1800’s in the style of brick, bow-front townhouses and is home to a diverse population. 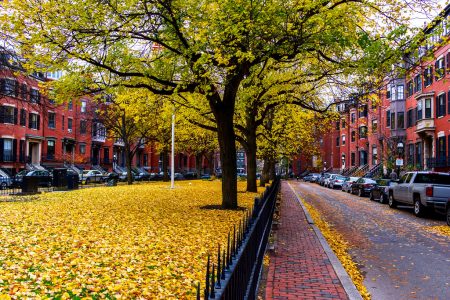 Back Bay
Situated on the banks of the Charles River, Back Bay was developed in 1856 into a row of beautiful Victorian townhouses and brownstone residences. Most of these stately residences have now been converted into condominiums. Back Bay features chic shopping areas, trendy restaurants, and many office buildings, and is a very popular area in which to live. Newbury Street, a town promenade, is famous for its three hundred stores, fifty salons and thirty restaurants. The Back Bay district also features forty art galleries. The Charles River Esplanade includes beautiful running/biking trails and views of the river. 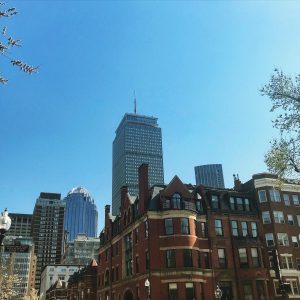 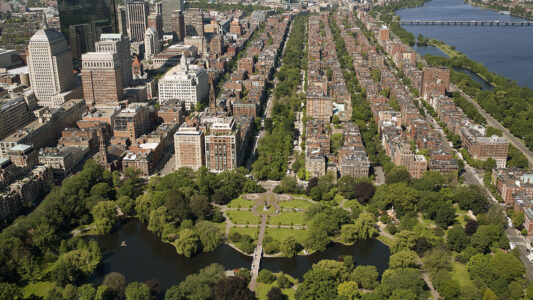 Beacon Hill
The Beacon Hill area is a maze of red brick sidewalks and cobblestone streets dating back to the 18th and 19th centuries. As you walk by the townhouses, its historical aura is created by the vintage purple windowpanes, the gas street lanterns, and wrought iron grill work. This was the area of Boston’s original Brahmin elite and remains an exclusive, though somewhat more diverse area today. The attractive, domed State House is located at the crest of Beacon Hill. Charles Street is lined with many great restaurants, shops, and antique stores. The Boston Common (park), the Public Garden, and the Charles River are within walking distance – providing an attractive ambience for outdoor recreation. An interesting footnote: Beacon Hill acquired its name in 1634, when its elevation was recognized as a natural spot from which to observe any approaching enemy.

Faneuil Hall and Quincy Market
Faneuil Hall was the cradle of American liberty in the 1700’s, and it continues to function today as a forum for discussion of issues critical to the United States and the world. Quincy Market is made up of three restored complexes, dating back to 1926. These buildings house specialty shops and restaurants, including a long arcade of food specialty stores in the center of the building. There are more than twenty-one restaurants and over one hundred stores. Shoppers and diners throughout the market often enjoy live entertainment. 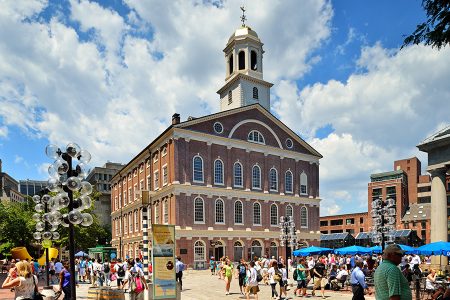 Seaport District and Waterfront
The Waterfront features condominiums, marinas, hotels, artists’ lofts, and museums that provide wonderful vistas of the city skyline and the harbor. This area boasts some of the most desirable addresses in Boston. The Children’s Museum, the Boston Tea Party Ship and Museum, the Computer Museum, and the New England Aquarium are all in this district.

North End
The North End has been home to many waves of immigrants over the centuries. It is the city’s oldest neighborhood, and you will quickly recognize the Italian cultural presence upon entering this section of the city. On every street there are tantalizing restaurants, colorfully ethnic meeting clubs, and pastry shops filled with delectable sweets. Colorful and lively festivals occur in the summer in its narrow streets. Paul Revere’s House and the Old North Church are located in the North End.

Fenway
The Fenway area is noted for our famous Fenway Park, home of the Boston Red Sox. In this area may also be found the Museum of Fine Arts, the Isabella Gardner Museum, and many teaching hospitals.

The Neighborhoods and Suburbs of Boston
Within the boundaries of metropolitan Boston are boroughs, each with its own distinct feature. Charlestown, settled in 1629, is home to the Bunker Hill Monument and the USS Constitution (“Old Ironsides”), the oldest commissioned ship afloat in the world. Logan Airport is located in East Boston. South Boston, referred to as “Southie” by its residents, is a unique part of the city where many of the Irish immigrants settled before the turn of the past century. Dorchester, the largest and most ethnically diverse neighborhood within the city of Boston, is home to the John F. Kennedy Museum and Franklin Park Zoo. Other communities of the city include Roxbury, Mattapan, Jamaica Plain, Allston, Brighton, and West Roxbury. The suburbs of Boston include Newton, Wellesley, Cambridge, and Brookline. All of these suburbs are within twenty-five minutes of the hospital. These areas offer ample opportunities for more spacious living than most large cities.