A Human Model of Exceptional Longevity and Aging Well Centenarians (age 100+ years) markedly delay disability towards the end of their very long lives, at an average age of ~93 years (that’s 33 years beyond the age of 60!).1 Centenarians are models of aging well. Some of our subjects, ~15% have no clinically demonstrable disease at age 100 years and we call them “escapers”. About 43% are “delayers”, or subjects who did not exhibit an age related disease until age 80 years or later. Finally, there are about 42% of our subjects who are “survivors”, or those with clinically demonstrable disease(s) prior to the age of 80 years.

James Fries’ compression of morbidity hypothesis states that as one approaches the limits of lifespan, diseases (morbidity) must be delayed (or escaped) towards the end of lifespan. We have observed such compression amongst supercentenarians (age 110+ years), where health span indeed approximates lifespan. Thus, instead of the aging myth “the older you get the sicker you get”, it is much more the case of “the older you get, the healthier you’ve been”.

According to data posted by the Population Division of the United Nations, in 2021 (https://population.un.org/wpp/Download/Standard/Population/): 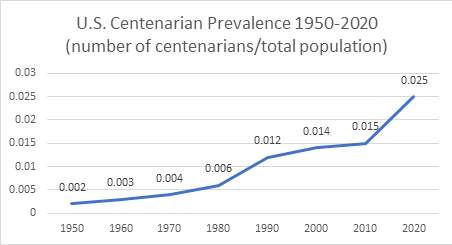 The vast majority of centenarians are age 100 and the numbers and prevalence drop off dramatically with increasing age thereafter. Finding accurate tabulations of people at these older ages is challenging.

Eighty-five percent of centenarians are women and 15% are men. Among supercentenarians (110+), the female prevalence may increase to about 90%. Though women by far and away win the longevity marathon, paradoxically men are generally functionally better off and healthier. This may be because women handle age related diseases better (how they do this is not clear) whereas at these ages, the men are at higher risk of dying from them. Thus, the men who survive at these very old age have to be relatively healthier.

The reasons for why and how women so handedly win the longevity marathon are unclear. As to why, we subscribe several hypotheses. One has to do with antagonistic pleiotropy, the phenomenon where some biological processes that provide an evolutionary advantage at a young age, become a disadvantage at older age. In men, for example, testosterone promotes muscle strength, red blood cell production and strong bones. However, at older age, testosterone increases risk for blood clot formation and therefore atherosclerosis, heart disease, stroke and pulmonary embolism. Testosterone production is an example of what are likely numerous instances of antagonistic pleiotropy in men. Another hypothesis is that the evolutionary pressure to have as many offspring as possible (in order to increase the opportunity to pass one’s genes down to subsequent generations) drives the selection for genetic variants that slow aging especially of the female reproductive system and decrease risk for aging-related diseases that adversely impact upon female fertility and reproduction. These genes would not only impact the reproductive system but the rest of the body as well, thus enabling a longer life span. Many of these genes reside on the X chromosome of which women have two and men have one. In women one of the two X chromosomes is inactivated though there is evidence that having a choice between the two X’s, while men are stuck with the one they have, could lead to a survival advantage.

There have been claims that 50% of French girls born today will live to 100. It is hard to imagine how this can be in light of what the current life table predicts based upon current age-specific mortality rates.

Two important take-aways from the table and graphs are:

Research articles about centenarians usually do not account for the fact that these rarer and rarer ages likely entail very different underlying degrees of resilience or resistance to the various intrinsic and extrinsic causes of aging and aging’s predisposition to aging-related diseases. As a result, the predictors (e.g. biomarker and genetic signatures) and risk factors for what are different exceptional longevity phenotypes are different. One reason supercentenarians are so rare is that the corresponding combination of genetic and other biological determinants (signatures or networks) is so rare.

Realizing that these dramatically different rates of survival likely represent different phenotypes of exceptional longevity, the New England and Tokyo Centenarian Studies and the Japanese semi-supercentenarian study have, over the past decade, made concerted efforts to enroll and study semi-supercentenarians and supercentenarians. These studies have found that the majority of supercentenarians are escapers of  aging related disease and disability at the age of 100.  Furthermore, with approximately 70% of them being escapers they are a relatively homogeneous group compared to the heterogeneity observed among centenarians around age 100 years. When we initially attempted to prove Fries’ hypothesis, we were studying centenarians that were too young and only when we included participants with ages that approximated human lifespan did we find evidence in support of the compression of morbidity hypothesis.

What do Centenarians Die From?

Dr. Thomas Perls suspects that many of the “poorly defined” are dementia in addition to the 7% noted as mental disease. Though note that when dementia occurs in centenarians, it tends to be of very short duration.

In 2014, the CDC produced a report on centenarian mortality and indicated the top five causes were:

Nature Versus Nurture: The Role of Genes Versus Environment in Aging and Exceptional Longevity

Gerontologists often cite studies of lifespans amongst identical twins reared apart to describe the genetic and environmental components of aging. Based upon these studies, the common answer is 70-80% environment and 30-20% genes. This makes sense in the context of results from the study of Seventh Day Adventists at Loma Linda University who as a group have perhaps the longest average life expectancy in the United States, 86 years for men and 89 years for women. The main attributes that these individuals have in common is that their religion for the most part asks that they have very good lifestyle choices. That is, they tend to be vegetarian, they don’t smoke, they regularly exercise and hey spend a lot of time with their families and with their religion. 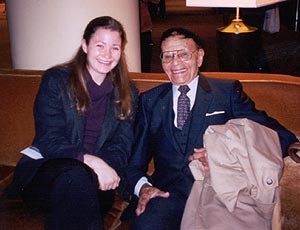 Many Americans do the opposite (e.g. excessive meat consumption, lack of exercise, smoking, etc) and thus it is not surprising that on average, Americans die 8-10 years earlier. What the 7th Day Adventist results also show us is that the average American has the genes to reach their mid-late 80s, they just need to take very good care of themselves with proper lifestyle choices. Also note that the oldest subjects in the twin studies lived to their early to mid-eighties. Therefore, again, these findings indicate that health behavior choices explain the vast majority of our ability or inability to reach 86 years for men and 89 years for women.