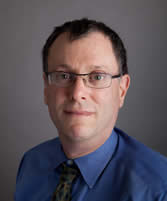 Dr. Lindsay Farrer is a medical geneticist at Boston University
Schools of Medicine and Public Health where he is Chief of Biomedical
Genetics and a Professor of Medicine, Neurology, Ophthalmology, Genetics
& Genomics, Epidemiology, and Biostatistics. Dr. Farrer is a
graduate of the University of North Carolina in Chapel Hill, received
his Ph.D. from the Indiana University School of Medicine, and gained
additional training in genetic epidemiology at Yale University. He holds
adjunct faculty positions at Harvard Medical School, Massachusetts
General Hospital, and the Veterans Administration Medical Center in
Bedford, Massachusetts. He is a Founding Fellow of the American College
of Medical Genetics. Dr. Farrer teaches several courses in human
genetics and genetic epidemiology at Boston University, directs Boston
University’s Molecular Genetics Core Facility which offers DNA
genotyping and sequencing services to investigators at the Boston
Medical Center, and provides genetic counseling and testing to patients
with a variety of inherited conditions.

Dr. Farrer’s research has lead to more than 300 publications on
genetic risk factors for several familial neurodegenerative and other
chronic diseases. In collaboration with other laboratories worldwide,
his group has localized genes causing a variety of rare and common
disorders including Alzheimer disease (AD), Wilson disease,
Machado-Joseph disease, Waardenburg syndrome, hypertension,
sensorineural deafness, and osteoarthritis. His group identified a
functional genetic variant in the complement factor H gene which
accounts for more than 30% of the attributable risk for age-related
macular degeneration (AMD), the leading cause of progressive vision loss
and blindness in the elderly. In collaboration with other researchers,
Dr. Farrer is conducting genome wide association studies (GWAS) for
several disorders including AD, substance dependence (cocaine, opiates,
nicotine and alcohol), AMD and vasculitis.  Dr. Farrer’s team is
also developing methods for locating genes that influence the natural
history of complex diseases and pharmacogenetic response.

Under Dr. Farrer’s leadership, the MIRAGE Project, a multi-center
study of AD funded since 1991 by the National Institute on Aging, has
made several important contributions to our understanding of the
interactions between genetic and environmental factors for the disorder.
This study has a particular emphasis on the genetics of AD in African
Americans. Thus far, detailed family histories, risk factor data, and
DNA specimens from more than 2,500 AD families have been collected as a
part of this program. MIRAGE was the first study to demonstrate that
genetic factors have a major role in the development of AD and that APOE
ε4 is more weakly associated with disease in men and persons older than
75 years.  Dr. Farrer co-directed the international effort which
demonstrated that SORL1 is genetically and functionally associated with
AD, thus implicating intracellular protein trafficking as integral
pathway in AD.  His laboratory conducted genome wide association
studies (GWAS) for AD in several populations including African Americans
and an inbred Israeli-Arab community.  Dr. Farrer serves on the
Executive Committee of the national Alzheimer Disease Genetics Consortium
and co-directs the data analysis effort for this large NIH-funded
project.  He and his colleagues recently discovered four new
Alzheimer genes in the largest GWAS of AD to date.

Lindsay Farrer, PhD is a senior investigator within the ADC. He is
Project Director for the Multi-Institutional Research in Alzheimer’s
Genetic Epidemiology (MIRAGE) study.

Dr. Farrer was named an Alfred P. Sloan Research Fellow, recognized
by “Who’s Who in the World”, and received several awards including the
Distinguished Alumnus Award from the Department of Medical and Molecular
Genetics at Indiana University School of Medicine and an award for
Outstanding Scientific Achievement from the Department of Medicine at
Boston University. He is a member of several scientific and medical
organizations including the American Society of Human Genetics. He is a founding member of International Genetic Epidemiology Society and was elected to the World Federation of Neurology and Human Genome Organization.