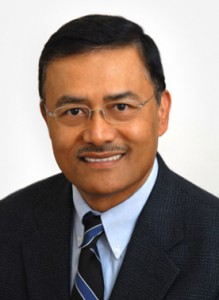 PROFESSOR OF MEDICINE AND OPHTHALMOLOGY

Vascular basement membrane thickening is a prominent and characteristic lesion of diabetic retinopathy. We have hypothesized that excess synthesis of basement membrane components occurring in diabetes is a critical pathogenetic event in the development of vascular basement membrane thickening and complications of diabetic retinopathy. Having shown that the mRNA level of basement membrane components fibronectin and collagen IV are increased in diabetic retinas, our laboratory plans to reduce the synthesis of these basement membrane components by using antisense oligonucleotides, a powerful molecular biological tool that offers a unique opportunity to down regulate specific gene expression.
Experiments performed with antisense oligonucleotides in our laboratory have shown reduction of fibronectin mRNA and protein level by nearly 50% in cultured endothelial cells exposed to high glucose. Recently we have developed a strategy for in vivo application of antisense oligonucleotide and tested its applicability towards reduction of specific gene expression in retinal vascular cells. Following intravitreal delivery of antisense oligonucleotides we have reduced fibronectin overexpression in the diabetic rat retina that reduced significant retinal vascular cell loss associated with the development of diabetic retinopathy.
Another project in our laboratory, aims at understanding how retinal vascular homeostasis is disrupted by diabetes. In this project we are currently investigating whether high glucose alters the expression of endothelial specific connexins (gap junction proteins) (Cx37, Cx40, Cx43), and connexin phosphorylation pattern. In a different project, we are studying mechanism(s) on how diabetes might alter expression of the tight junction proteins leading to blood retinal barrier (BRB) breakdown in diabetic retinopathy.
We are investigating a potential biochemical link between the pathogenesis of diabetic retinopathy and glaucoma by examining the consequence of high glucose-induced overexpression of ECM proteins in trabecular meshwork cells and Schlemm’s canal cells and its potential role in the development of outflow resistance.