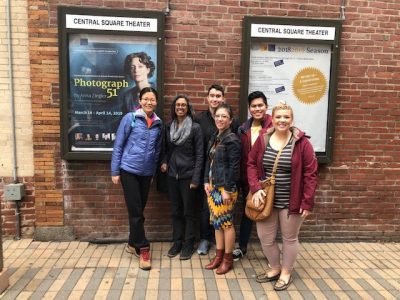 On March 31, 2019, the Graduate Program in Genetics and Genomics took out the students for a genetics and genomics related social activity! They started out the day with lunch at a local Irish pub, The Asgard, and later made their way to a performance at Central Square Theater, called Photograph 51. This play illustrated the challenges that women in science have faced in the past and the present, and discusses the constant competitive race to publish. In the performance, Dr. Rosalind Franklin’s “DNA discovery leads to the Nobel Prize – not for her, but for three men: Francis Crick, James Dewey Watson, and Maurice Wilkins” and highlights the chase to map the DNA molecule. This production tastefully promoted conversation on the challenges of gender bias in the scientific community and even delved deeper into the #MeToo movement.  Overall, the outing was a success with good food and good company, topped off with stimulating conversation.