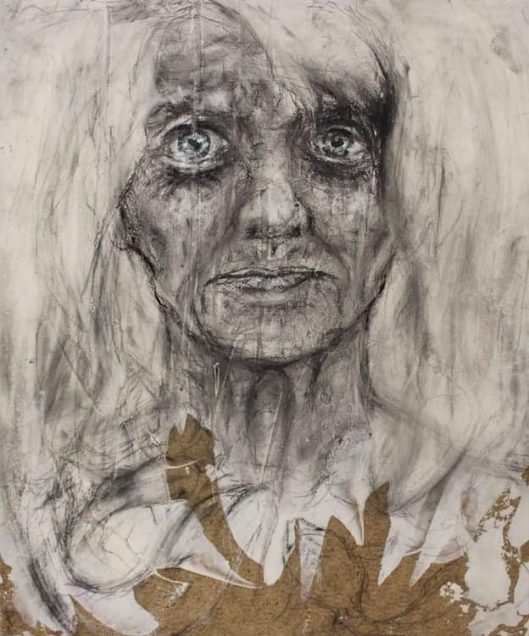 From the Artist:
“The mass exploitation of minority groups in America most notably African-Americans is widely known and terribly intertwined with our country’s history. Joice Heth is one example of such exploitation at an individual level. She was an enslaved African American woman who was publicized in the 19th century as having been George Washington’s nanny – putting her at an astonishing 161 years old, despite being actually half that age at most. Phineas Barnum was the man who advertised her as such and used her in exhibitions for financial success. To more visually convince his audience of her “”extraordinary”” age, he pulled out all her remaining teeth and kept her heavily under the influence of liquor.

When putting together this piece, I aimed to portray Heth with an air of confrontation and vulnerability. The loss of her teeth are only subtly included as a gumline veiled by the skin on her chin, because I wanted to bring the most attention to her eyes which look directly at the viewer. My goal was to give one face to the mass exploitation of millions, as “”the death of one is a tragedy, the death of millions is a statistic.”” I hope to direct a sense of uneasy intimacy between the viewer and this woman who was unfortunately one of the millions of people who were horribly mistreated by our nation.”