Dr. Alik Farber Promoted to Professor of Surgery and Radiology 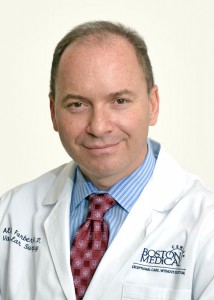 Dr. Alik Farber, Chief, Division of Vascular and Endovascular Surgery at Boston Medical Center (BMC) has been promoted to Professor of Surgery and Radiology at Boston University School of Medicine (BUSM).

Dr. Farber has served as a principal investigator in a number of clinical trials and is currently a National Co-Chair of the BEST-CLI Trial (Best Endovascular versus Best Surgical Therapy in Patients with Critical Limb Ischemia), a $25 million grant awarded by the National Institutes of Health (NIH), to conduct a four-year, randomized clinical trial comparing traditional bypass surgery with the less invasive alternative of endovascular treatment for patients with critical limb ischemia (CLI).

He has written and published many articles about vascular and endovascular surgery, has served as a moderator for various vascular meetings, and developed a formal education program in vascular surgery while at Cedar-Sinai Medical Center in Los Angeles, CA, which resulted in the Golden Apple Teaching Award for teaching and mentoring residents. Since his arrival at BMC, Dr. Farber has made it his goal and mission to foster continued clinical excellence and academic productivity. He is currently the director of a fourth year medical school elective (BMC Surgery Bootcamp) which is designed to prepare medical students who are going into surgical internship.