Much of what we have learned about mammalian muscle has resulted from analysis of the exceptionally well ordered indirect flight muscles (ifm) in insects, such as giant waterbugs, honeybees and fruit flies. Studies on fruit flies (Drosophila) are additionally useful because of the genetic approaches available. For example, since many ifm contractile proteins are encoded by genes (or exons) that are expressed only in the ifm, flies with mutations in such genes, though flightless, are otherwise viable in the laboratory. 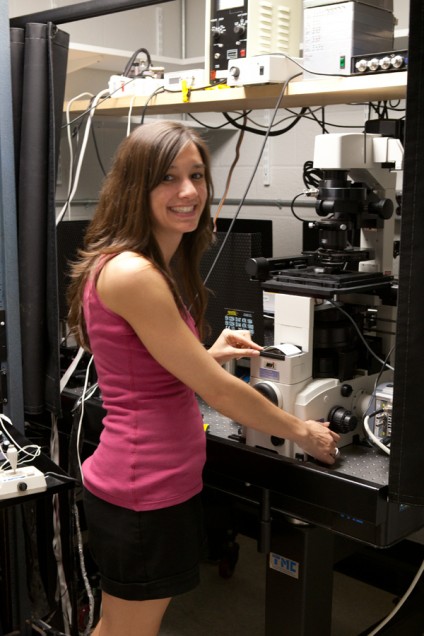 Analysis of the disruption of structure and function in the ifm of these mutants, allows us to deduce the relationships among contractile proteins in normal muscle. Using a variety of approaches (eg. molecular biological, biochemical, ultrastructural, immunocytochemical) to study indirect flight muscles of normal and mutant flies, our laboratory has identified and is exploring the role of several novel proteins in the Z-band, in thick filaments of the A-band and in the connecting filaments linking the Z-band and thick filaments together.

The McKnight laboratory is interested in the structure and function and folding of a variety of proteins. A long term project in the lab has focused on the F-actin-binding “headpiece” domain found at the extreme C-termius of a several classes of cytoskeleton-associated proteins. We use a combination of molecular biological, biochemical, biophysical and NMR techinques to study this novel motif. Our long term goal is to understand how, when, and where they recognize F-actin (and other proteins), and to determine the roles of headpiece domains in the cell.