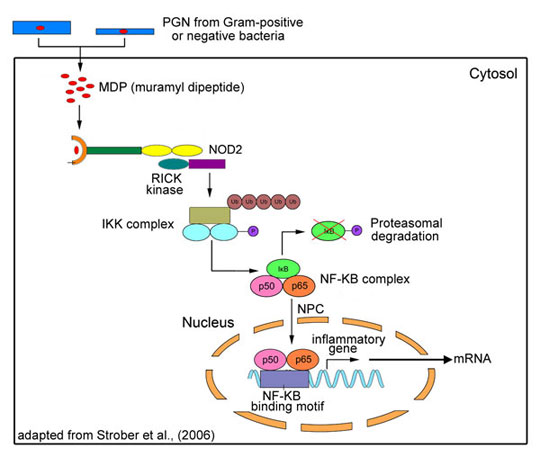 The human NOD2 protein from the Card15 gene is of particular interest because mutations in this protein have been implicated in Crohn’s disease, a chronic severe inflammation of the small intestine. Mutations in NOD2 may also give rise to early onset granulomatosus arthritis (Blau’s syndrome). During NFκB activation, a CARD in the NOD2 complex binds to the adaptor molecule RICK. The CARD and kinase domain of RICK are separated by a central region that binds to the regulatory subunit (IKKκ/NEMO) of the IKK complex. Thus, NOD2 assembly may recruit RICK through CARD-CARD interactions, and this kinase may then transiently recruit the IKK complex to this platform. Phosphorylation of IKK by RICK then activates this downstream kinase leading to phosphorylation of the IKκ regulatory subunit of NFκB. This promotes ubiquitination of the IKκ subunit and its subsequent degradation. Released NFκB then translocates into the nucleus where it up-regulates genes involved in innate and adaptive immunity. We are studying the structure and function of recombinant NOD2 complexes to provide an understanding of assembly and signaling by this platform.