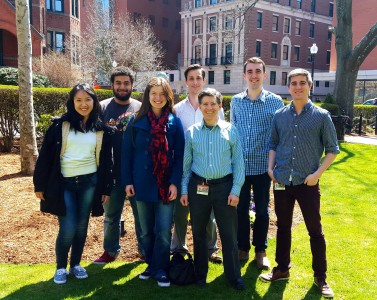 Welcome to the Laboratory of Neurodegeneration under the direction of Principal Investigator Benjamin Wolozin, M.D./Ph.D.

The research on Parkinson Disease focuses on genetic factors implicated in Parkinson’s disease, including LRRK2, Α-synuclein, parkin, PINK1 and DJ-1. Research in our laboratory suggests that genetic mutations linked to Parkinson’s disease act by converging on a biological system that integrates the stress response, regulating autophagy, protein translation and mitochondrial function. Using genetically modified cells (e.g., primary neuronal cultures or cell lines) and genetically modified animals (C. elegans and mice), we have demonstrated that α-synuclein and LRRK2 enhance the sensitivity of dopaminergic neurons to mitochondrial dysfunction. One of the main goals of our laboratory is to identify targets for therapeutic intervention. To this end, we have generated a Regulatory Network for LRRK2 that identifies numerous proteins/genes that modify LRRK2 function; this work is currently being reviewed. Our work identifying LRRK2 binding proteins points to particular biochemical pathways mediating the actions of LRRK2. We have recently shown how GTPases can modify the function of LRRK2. We demonstrated that rac1 binds and regulates LRRK2. Over-expressing rac1 can overcome deficits in neurite extension caused by the G2019S mutation in LRRK2. We also demonstrated that LRRK2 binds to MKK6, a kinase that lies upstream of p38 and regulates the stress response. 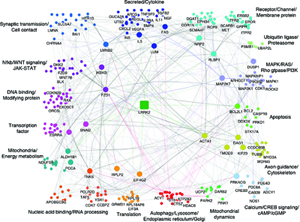 LRRK2 regulates membrane localization of its binding proteins, including MKKs, JIPs, rac1 (a small GTPase) and other important proteins mediating the stress response. This work has direct relevance to therapy because it points to chemicals that might protect dopaminergic neurons and modify the course of Parkinson’s disease. For instance, we are investigating the action of SirT1 agonists (such resveratrol, the compound found in red wine or SRT1720, produced by Sirtris Pharmaceuticals), which stimulate synthesis of anti-oxidant enzymes and appear to offer protection in animal models of Parkinson’s disease. We are also investigating the action of brain penetrant mTOR inhibitors, such as rapamycin and ridiforalimus, which stimulate the neuron to remove protein aggregates, and offer neuroprotection. 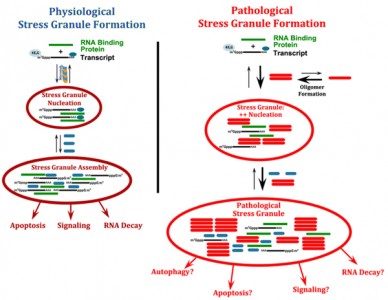 Our current work focuses on a protein, TDP-43, that was recently shown to be the predominant protein that accumulates during the course of the disease. Our work focuses on the role of TDP-43 as a RNA binding protein, which are a class of proteins that regulate trafficking of mRNA in neurons insuring that the correct protein is made at the correct place in the neuron. RNA binding proteins have an unusual biochemical behavior because they undergo reversible aggregation. We hypothesize that TDP-43 normally functions to regulate RNA metabolism and RNA translation/protein synthesis, through formation of RNA protein complexes. However, stress, mutations in TDP-43 and/or mutations in TDP-43 accessory proteins, such as ataxin-2, can lead to excessive formation of RNA protein complexes, including RNA granules, stress granules and trafficking granules, interfering with protein translation and leading to neurodegeneration. Formation of cytoplasmic TDP-43 inclusions appears to be intimately linked to RNA metabolism, and specifically the biology of RNA granules. RNA granules are protein-mRNA aggregates that appear in synapses, in dendrites and in neuronal soma; they function as centers that regulate local protein translation and metabolism of RNA. The stress granule (SG) is a type of RNA granule that forms in response to many different types of stress. Studies from our laboratory, and other laboratories, show that TDP-43 inclusions in human brain (as well as in cell culture) co-localize with SGs, and that agents that inhibit SG formation also inhibit formation of TDP-43 inclusions. Our research shows an intimate link between the pathophysiology of TDP-43 and the mechanisms of disease in ALS. Our work indicates that TDP-43 can be induced to form inclusions in cell culture and that most TDP-43 inclusions co-localize with SGs. SGs are cytoplasmic RNA granules that consist of mixed protein – RNA complexes. Our work shows that increased TDP-43 inclusion formation is associated with accumulation of TDP-43 detergent insoluble complexes. TDP-43 associates with SG by interacting with SG proteins, such as TIA-1, via direct protein-protein interactions, as well as RNA-dependent interactions. The signaling pathway that regulates SGs formation also modulates TDP-43 inclusion formation. 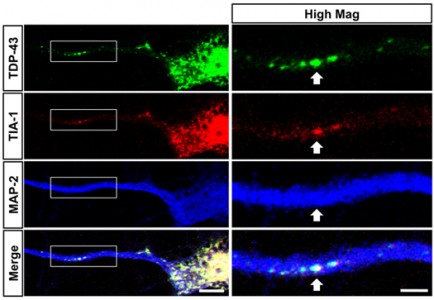 Importantly, we observed that inclusion formation mediated by WT or mutant TDP-43 can be suppressed by treatment with translational inhibitors that suppress or reverse SG formation. This suggests novel routes of pharmacotherapy. Finally, using Sudan black to quench endogenous autofluorescence, we have shown that TDP-43 positive-inclusions in pathological CNS tissue co-localize with multiple protein markers of stress granules, including TIA-1 and eIF3. Although we do not know whether SG formation is the only process mediating pathophysiology of ALS, study of SGs clearly provides a valuable approach for investigating processes that are likely to be central to the pathophysiology of ALS. The putative relationship between TDP-43 and SG biology provides a novel approach for dispersing TDP-43 inclusions using physiological pathways that normally regulate this reversible process and, indeed, we are developing novel pharmaceuticals capable of reversing inclusions formed by TDP-43.

Dr. Wolozin was recently given the Zenith Award to propel his studies of the roles of RNA binding proteins in Alzheimer’s disease. We recently discovered that the Alzheimer brain is characterized by massive accumulation of RNA binding proteins causing pathological stress granules.  Using immunoprecipitation combined with mass spectrometry, we showed that tau contributes to the regulation of RNA metabolism. Tau regulates the proteins that interact with RNA binding proteins, such as TIA1. Phosphorylation and somatodendritic localization of tau (which are pathological hallmarks of disease) contribute to the translational stress response by promoting stress granule formation. The converse is also true: tau localizes to stress granules. Persistent stress granules increase tau stability and promote tau aggregation. This work suggests that stress granules can serve as a nidus for tau pathology. 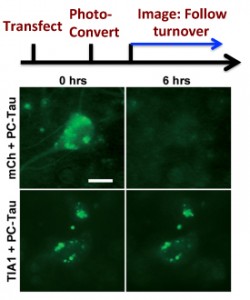 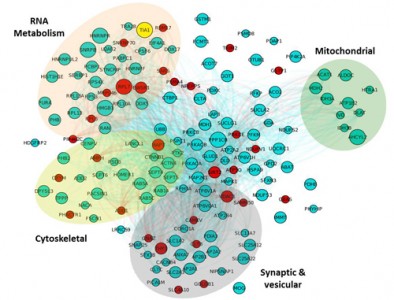 Pharmacoepidemiology: We are using epidemiological approaches to identify promising drug candidates for therapy of Alzheimer’s disease. Our current work focuses on Angiotensin Receptor Blockers, which are associated with a strong reduction in the incidence and progression of dementia among patients with Alzheimer’s disease and possibly also Parkinson’s disease. Previously, we demonstrated that use of statins is associated with a reduced incidence of dementia. We do this work by using large databases, such as the Veteran’s Affairs Database (about 5 million subjects), to study FDA approved medications. The large size of these population based databases allows analysis of medication use in a manner that is just not possible in the smaller cohorts classically used by epidemiologists in the field of dementia research. The reason is that the prevalence of use of many medications is insufficient to produce meaningful results in cohorts with less than 30,000 – 100,000 people. The large size of population based databases, such as those in the Veterans Affairs system, provides sufficient statistical power to analyze how the patterns of secondary disease (such as dementia among users of angiotensin receptor blockers) vary among subjects using these medications. Our studies of pharmacoepidemiology generate hypotheses that that spur cellular and molecular research investigations back to the laboratory to determine the putative mechanism through which the medications might exhibit their protection. For instance, this work has prompted extensive studies on the role of cholesterol in regulation of the metabolism of amyloid precursor protein and production of β-amyloid. Cellular and Molecular Biology: Our current research related to Alzheimer’s disease focuses on the pathophysiology of RNA binding proteins and the protein translational system in Alzheimer’s disease. This is a rapidly evolving field that has received relatively scant attention, yet have a profound impact on the cell. Cellular stress elicits a switch in protein translation from cap-dependent to cap-independent RNA translation, which inhibits synthesis of non-housekeeping proteins, and maintains synthesis of proteins that protect against stress, such as heat shock proteins. The translational stress switch is associated with cytoplasmic translocation of mRNA binding proteins, and consolidation of these proteins with mRNA to form RNA protein complexes that are termed the stress granules (SGs). SGs function in part to triage RNA and sequester transcripts not needed for coping with the stress. The mechanism of SG formation is striking because it results from the regulated, reversible aggregation process of mRNA binding proteins, which is mediated by a polyglutamine rich prion-like domain. Recent studies suggest that stress granules are a form of pathology associated with neurodegenerative diseases. Studies of Huntington’s disease, Creutzfeld-Jacob disease and our recent study of ALS and frontotemporal dementia (FTLD-U) all exhibit inclusions composed of the pathological protein aggregate that are co-localized with TIA-1, a marker of SGs. However, the evolution of SG pathology in these diseases is uncharacterized. Our current work examines human cases with AD and a transgenic mouse model of tauopathy and Alzheimer’s disease to determine the development of SG pathology in these common diseases. Our results indicate that TIA-1-positive SGs are abundant in cases of AD and increase with disease severity in the JNPL3 mutant tau mouse. Co-localization of tau with TIA-1 SGs varies with disease severity. Pathological tau and SGs occur in separate compartments when present as small inclusions (1-3 μm), but co-localization increases dramatically with disease severity and SG size. In contrast, cytoplasmic SGs composed of TTP and G3BP show a pathological profile that is strikingly different that TIA-1 because G3BP become widely distributed as disease severity progresses, yet G3BP does not co-localize with tau inclusions at all, and TTP co-localizes only late in the disease process. The presence of RNA granules that accumulate in tauopathies, but are not co-localized with tau pathology, points to novel types of molecular neuropathology that is not associated with classic markers of disease pathology.