Laboratory for Cortical Organization and Architectures

The Laboratory of Cortical Organization and Architectures focuses on network organization at the cellular level (cell types, modularity, and columns) in rodent, nonhuman primate, and postmortem human tissues. This is considered in the broader context of heterogeneity, species comparisons, and applicability to non-neural network architectures.

(A) Three groups of parietal callosal axons in the macaque (consisting of 5, 3, and 4 axons in A, anterogradely labeled by BDA and serially reconstructed across sequential tissue sections). (B) Single section of corresponding BDA histology. As shown for each of the three groups, axons were followed for 1.1–2.8 mm AP and 2.3–6.6 mm ML (mediolateral). Case P4 had a tracer injection in area 5, and case I26 had a large tracer injection in the inferior parietal lobule (area 7). Medial is at the left (cut edge of the corpus callosum). By color coding the individual axons, it becomes apparent that the order is shuffled, even over these relatively short distances. The medialmost and lateralmost positions of the individual axons can be compared, as summarized in the color boxes, at upper left for the three axon groups. Small histology sections at the right indicate the AP level of the reconstructions. Intertwinings of individual axons are indicated by solid arrows (within the 50µm tissue section) or, if the crossings occur in the same focal plane, hollow arrows. (from Rockland, 2018, chapter 10 in Primates, IntechOpen) .

I. “Towards a Layer 1 Connectome in the macaque monkey” with Dr. Richard Born (HMS) A connectome of cortical layer 1 is critical both for the interpretation of the existing body of functional data and for generating new hypotheses. As a first step, we will be focusing on technical development, to adapt high resolution techniques (such as dAPEX2 and x-ray holographic nano-tomography) to non-human primate tissues. Focus is on fine dissection of V2 feedback connections to layer 1 of V1. 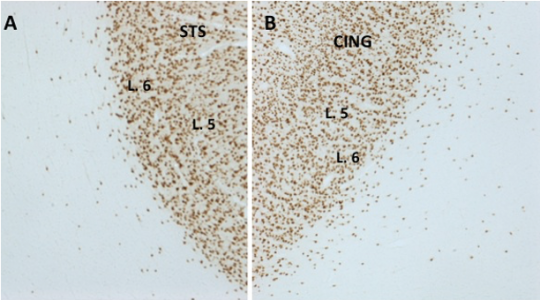 White matter (WM) neurons are a mixed population of excitatory and inhibitory neurons, that are phylogenetically conserved and have important roles in early cortical development. In primates and other species with large gyrencephalic brains, substantial numbers of WM neurons persist in the adult, where they are thought to contribute to multiple processes, including vascular regulation and hemodynamic changes, coordination of corticocortical and thalamocortical communication, and central cholinergic circuitry. This project aims to acquire quantitative data about regional and cell-type distribution of WM neurons in the adult rhesus monkey and their fall-off in the infant, with the additional aim of developing a nonhuman primate model for further investigations of WM neuron function, with relevance for normal and abnormal human brain function. 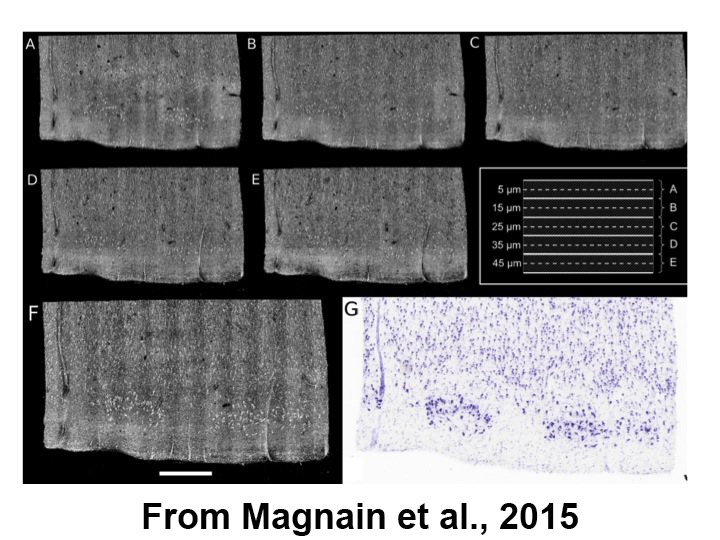 Human neuroanatomy has long suffered from methodological limitations, where in vivo MRI images fall short of cellular-level resolution but traditional histology, despite better resolution, is prone to processing distortions and is almost impractically labor-intensive at a large scale. Optical coherence tomography (OCT), in a novel application to postmortem brain tissue, is a new bridge approach that produces histology-level images and can facilitate higher-resolution interpretation of MRI images. As an essential prerequisite, the current project aims to achieve a cellular-level evaluation of OCT images by generating, registering, and comparing matched OCT-histology datasets, where small tissue blocks are first imaged by OCT and subsequently sectioned and processed by traditional histology and immunocytochemistry for specific cell and myelin markers.