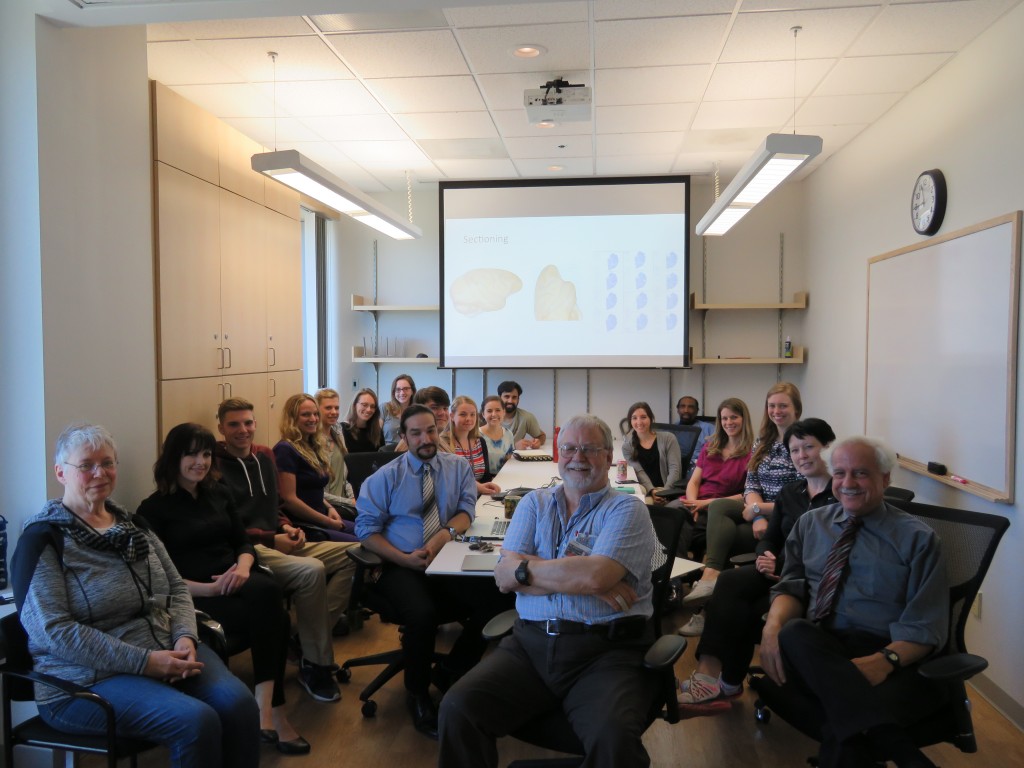 The Laboratory of Cognitive Neurobiology focuses its research efforts on the neurobiological bases of learning and memory in non-human primates. We have particular interest in the structural, physiological, and neurotransmitter correlates of cognitive decline in aging and age-related disease (e.g. hypertension and stroke), the separate and interactive roles of the prefrontal cortices and hippocampal complex in executive function and declarative memory, and the structural and functional changes in the brain as a consequence of prenatal malnutrition. Collaborative studies are conducted on the role of melatonin in sleep and circadian rhythms in the aged monkey; on studies of the brain in human subjects with MCI and Alzheimer’s disease using structural and related MRI techniques; and on the integrity of the blood-brain barrier in aging, hypertension, and substance abuse.

Our research is supported by several NIH grants, including a Program Project on the Neural Bases of Cognition in Aging, a MERIT award grant on Hypertension and Middle Age, and an RO1 on the interaction between prefrontal cortex and the hippocampal formation.

Our laboratory is housed on the seventh floor of the Center for Biomedical Research and consists of four faculty (Mark Moss, Douglas Rosene, Ron Killiany and Tara Moore), three research fellows, and eight graduate students. We have an active laboratory that covers a wide-range of research techniques ranging from in situ hybridization, receptor autoradiography, immunocytochemistry, structural and functional MRI, and automated primate behavioral testing.

We have a suite of four testing chambers in which monkeys are behaviorally assessed on a wide range of cognitive tasks that parallel those used in humans.

Our studies utilize a variety of MRI techniques, including structural MRI, functional MRI, and MR spectroscopy. A 3.0T Philips dedicated research magnet is housed in the Evans Biomedical Center, connected directly to our research building.

We use antibodies directed at particular constituents to label neurons and glia to visualize specific cells in the neuropil. We use this technique to label inflammatory markers, neurotransmitter-related compounds, metabolic markers, etc.

This technique is used to allow the demonstration of specific nucleic acid sequences in their cellular environment in the brain.

We routinely use this technique to measure conduction velocity and other parameters of neuronal conduction across or within the cerebral hemisphere to supplement our study of the neurobiological basis of altered cognitive function in the primate.

We are working with new techniques such as cortical cooling and Transmagnetic Cranial Stimulation (TMS) to induce temporary dysfunction of a specific cortical region. This allows one to “turn on ” or “turn off ” a particular region of the brain to assess its role in a given function or neuronal circuit.

Douglas Rosene
Dr. Rosene’s particular interests focus on (1) the effect of age on brain integrity, including white matter, neurotransmitter systems and neural transmission in a primate model of normal human aging (2) the interaction of the prefrontal cortices with the medial temporal lobe limbic system 3) the effect of prenatal malnutrition on brain integrity in a rodent model and 4) modeling methods to characterize age-related changes in microcolumns in the cerebral cortex.

Ron Killiany
Ron Killiany has a primary interest in various applications of MRI in animal models and humans alike. He works closely with investigators at Brigham and Womens Hospital and Massachusetts General Hospital to develop and implement imaging sequences to measure selective brain regions as antemortem markers of Alzhimer’s Disease

Tara Moore
Dr. Moore’s primary research interests involve the investigation of the recovery of fine motor function and re-organization of the motor cortex following cortical injury. Using a non-human primate (NHP) model of cortical injury developed with Drs. Rosene and Pessina, she is establishing the rate and pattern of recovery of fine motor function of the hand and the histopathological response of the brain to injury in this model. In addition, studies with this model include assessing the efficacy of various therapeutics to enhance the recovery of function following injury.

Farzad Mortazavi
Dr. Mortazavi’s primary interests are  the effects of normal aging on structure and function of the brain.  Of particular interest: microcolumns, white matter pathways.  He is particularly interested in  3D reconstructions of white-matter pathways and cortical columns using Confocal Microscopy, 2-photon Microscopy and statistical physics for analysis of these types of big data.

Pessina, MA, Bowley, BGE, Rosene, DL, and Moore, TL. (2019). Assessment of recovery of fine motor function of the hand in a rhesus monkey model of cortical injury: an adaptation of the Fugl-Meyer Scale and Eshkol-Wachman Movement Notation. In Press, Somatosensory and Motor Research.

Pessina, MA, Bowley, BGE, Rosene, DL, and Moore, TL. Assessment of recovery of fine motor function of the hand in a rhesus monkey model of cortical injury: an adaptation of the Fugl-Meyer Scale and Eshkol-Wachman Movement Notation. In Press, Somatosensory and Motor Research.