We take a structural approach to study the assembly and function of actin-containing thin filaments in striated and smooth muscles. We also investigate thin filament architecture in non-muscle cells. Our principal goals are (1) to analyze and elucidate the mechanisms of thin filament-linked regulation of muscle contraction and (2) to determine the role of tropomyosin as the thin filament gatekeeper controlling access of actin-binding proteins onto actin filaments, thus controlling cytoskeletal function. To accomplish these goals, we use a combination of molecular biology, electron microscopy, and image reconstruction to better understand the structural interactions and dynamics of protein components of isolated and reconstituted thin filaments.

We also characterize thin filament components using state-of-the-art computer simulation techniques involving Molecular Dynamics (MD) and Energy Landscape protocols. To date, our EM analysis of thin filament proteins and the results of the in silico computational procedure have been mutually supportive. In a number of instances, MD simulations and energy landscapes have yielded insights not always easily obtained experimentally.

We combine our studies on native thin filament components with corresponding ones on mutants to better understand abnormal filament function in myopathic disease processes. We also develop drugs to fit within pockets found in tropomyosin to readjust normal and aberrant thin filament on-off switching.

Our laboratory provided fundamental structural evidence supporting the steric-blocking mechanism of muscle regulation by identifying the positions assumed by tropomyosin on actin in the presence and the absence of Ca2+ using cryo-electron microscopy and negative staining. We also demonstrated that on activation tropomyosin moves away from myosin cross-bridge binding sites on actin in two steps, one induced by Ca2+ binding to troponin and a second induced by the binding of myosin to actin. In addition, we showed that the shape of tropomyosin is designed to match the contours of the Factin filament and that tropomyosin’s curved shape is semi-rigid, and thus capable of cooperative movement on thin filaments. Merging our experimental results and our computational chemistry, we developed the first all atoms model of the F-actin-tropomyosin filament. The model indicates at an atomic level how point mutations in tropomyosin associated with Hypertrophic Cardiomyopathies can lead to muscle dysfunction.

Our laboratory is continuing the above-mentioned studies to obtain even greater resolution of the processes involved in regulating contractile and cytoskeletal filaments in striated and in smooth muscle filaments. At the same time, we are investigating the structural organization of troponin on thin filaments and the changes it undergoes on binding of Ca2+. We have also engaged in studies on the structural interactions of other actin binding proteins including caldesmon, calponin, cortactin, and native and mutant dystrophin, filamin, fimbrin, fascin, leiomodin and tropomodulin, namely proteins that play important roles in the organization of the cytoskeleton in striated and smooth muscles as well as in non-muscle cells. 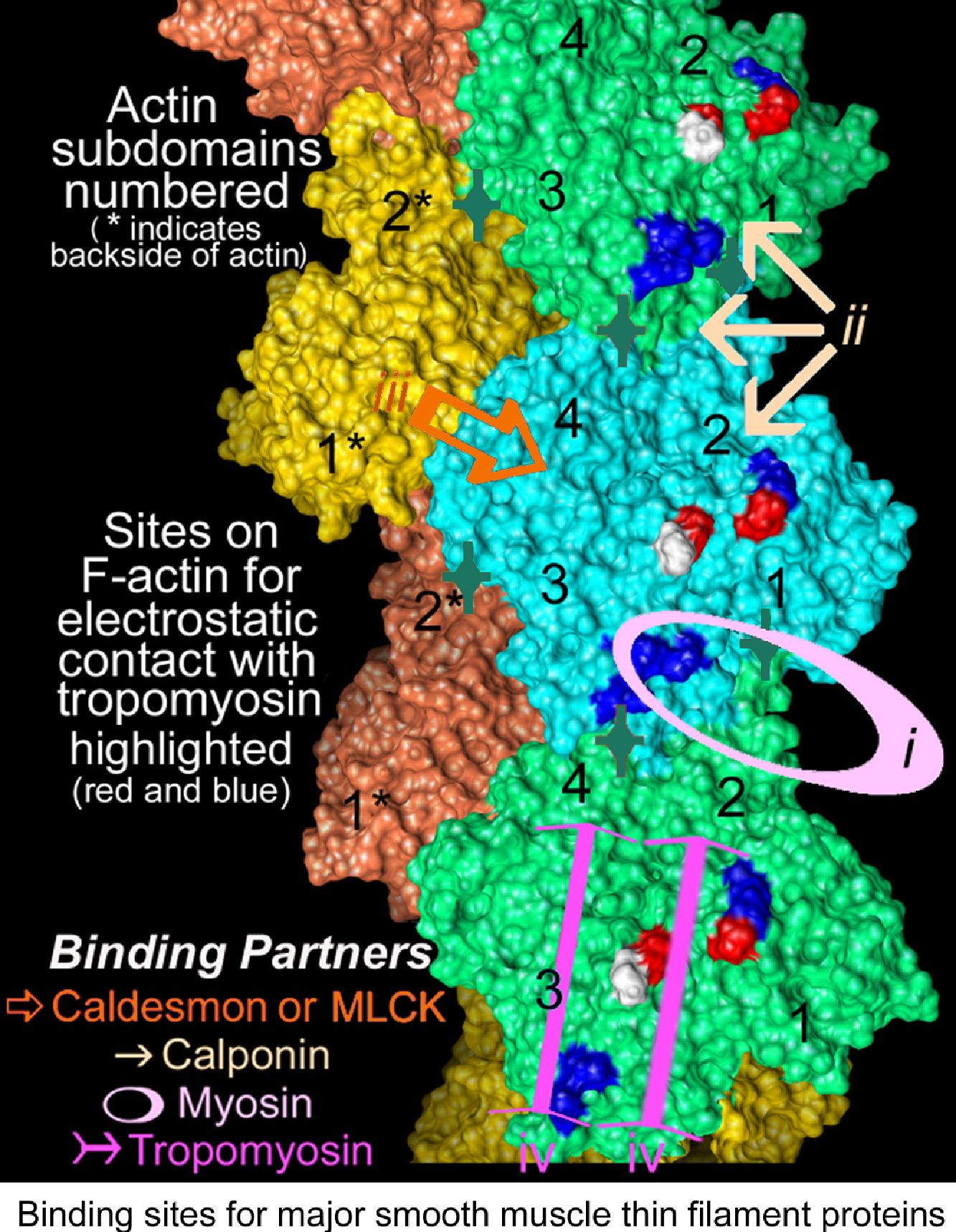 Vascular smooth muscle stiffness is a major contributor and leading risk factor in the development of cardiovascular dysfunction. An examination of how the smooth muscle cell actin cytoskeleton is modulated by accessory proteins to control vascular stiffness is an ongoing goal of our work.

Lehman, W. (2017) Switching muscles on and off in steps – The McKillop-Geeves threestate model of muscle regulation. Biophys. J. (in press).

We collaborate with colleagues in several laboratories with similar interests including: