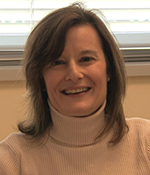 We are interested in understanding the molecular pathways underlying normal blood cell development and how, when these pathways are deregulated, leukemia can result.  Our studies focus on the role of the nuclear protein Ikaros in both normal and abnormal blood cell development.  Ikaros is a transcriptional regulatory protein that can act as both an activator and a repressor.  It is expressed almost exclusively in cells of the hematopoietic lineage and is required for normal development of all blood cell lineages.  In addition, mutation of Ikaros leads to T cell leukemia in genetically engineered Ikaros mutant mouse models.  Because Ikaros is highly conserved (95% identity at the amino acid level in mice and humans), studies performed to understand Ikaros functions in mice will almost certainly translate to understanding its role in human cells.  We have focused our studies on defining the role of Ikaros in T cell development and function as well as on how Ikaros acts as a tumor suppressor.  A summary of some of the research areas we are pursuing and questions we are asking is highlighted below.

1)  Ikaros and Notch: Interplay during T cell development and leukemogenesis

Ikaros is a tumor suppressor for the lymphocyte lineage in mice.   100% of mice with a genetically engineered mutation in the Ikaros gene (Ikaros null mice) develop T cell leukemia.  Importantly, mutations in Ikaros  also are found in human leukemia.  High levels of non-DNA binding (dominant-negative) Ikaros isoforms have been observed in leukemic cells from children with T- and B-Acute Lymphoblastic Leukemia (ALL).  More recently, mutations in IKZF1, the gene encoding Ikaros, were identified as a strong predictor of increased likelihood of relapse in children with B-ALL and as a common genetic lesion in Philadelphia chromosome-positive adult ALL. The Notch receptor is a transmembrane protein that, like Ikaros, plays an important role in T cell development in the thymus.  Notch function is regulated through two proteolytic cleavage events that occur upon recognition of its extracellular ligand.  These cleavages free the intracellular domain, which travels to the nucleus.  Here, intracellular Notch regulates transcription of Notch target genes through its binding to and activation of the DNA-binding factor RBP-Jk.  Mutations in Notch that result in its constitutive activation have also been identified in human ALL.  We have shown that Ikaros is required for transcriptional repression of Notch target genes in developing thymocytes and leukemia cells, and hypothesized that this may contribute to Ikaros’ mechanistic role as a tumor suppressor.  We are characterizing the importance of this interaction to the leukemogenic process in Ikaros null mice and are interested in understanding how RBP-Jk and Ikaros coordinate Notch target gene repression vs. activation during normal T cell development.

CD4+ helper T (Th) cells are important mediators of the immune response through their regulated production of cytokines.  Naive CD4+ Th cells differentiate during the course of an immune response to secrete cytokines tailored to promote eradication of the specific pathogenic assault.  Two well-studied CD4+ T cell effector subsets, Th1 and Th2 cells, are defined by their ability to secrete the cytokines IFNg and IL-4, respectively. Th1 responses are most effective against intracellular pathogens such as viruses whereas Th2 cells protect against extracellular pathogens including bacteria and fungi.   A third subset of CD4+ T cells, called regulatory T cells, are critical for controlling both normal and abnormal (autoimmune) T cell responses.   Expression of IL-10 and TGF-b by these cells contributes to these roles.  In the absence of Ikaros, T cells are unable to develop into the Th2 lineage, but rather default to the Th1 lineage.  In addition, Ikaros has been defined as a regulator of many cytokine genes including IlL-2, IL-4, IFN-g and IL-10.  These data suggest that Ikaros is crucial for shaping the course of an immune response.  Future studies will include testing this hypothesis during the course of an in vivo immune response as well as determining the mechanism of Ikaros function in cytokine gene expression.  We are also interested in determining if Ikaros regulates regulatory T cell development and function.

3) A novel role for Ikaros in microRNA expression

MicroRNAs (miRNAs) are endogenous, single-stranded RNA molecules that regulate gene expression at the post-transcriptional level. They are known to play a role in most biological processes including regulation of T cell differentiation and function.   Interestingly, most miRNAs have multiple targets, such that one miRNA could have profound effects on the program of gene expression in a cell.  Currently, very little is known about transcriptional regulators involved in activation and repression of miRNA expression.  Since Ikaros is involved in a vast array of processes in blood cell development and function, and the mechanisms by which it does this are still largely unknown, we hypothesize that Ikaros could influence expression of a large number of genes through a role in regulation of specific miRNAs.  Using miRNA array analyses, we have identified miRNAs that are differentially expressed in Ikaros null and wild type CD4 T cells.  One of these has been linked to regulation of a signaling pathway downstream of T cell receptor (TCR) stimulation, the PI3-kinase pathway.  This is particularly interesting since, in the absence of Ikaros, T cells are hyper-responsive to TCR signals.   We plan to further investigate this potential mechanism underlying the hyperproliferative phenotype of Ikaros null T cells and to characterize Ikaros’ role in regulation of this, and other, miRNAs in T cells.