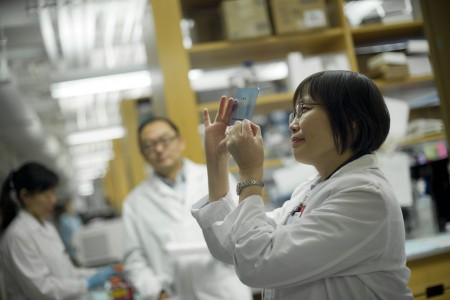 The Qiu lab utilizes a homebound elderly population in the Boston area. The homebound elderly suffer from a multitude of medical and psychiatric illnesses, including type 2 diabetes, late life depression, and AD (Qiu et al. 2010). Diseases in the elderly often co-exist, one disease may have manifestations in multiple organs, or one disease may lead to the development of another disease. Thus, the homebound elderly population is unique in studying the interaction between diseases in peripheral organs and the brain because of a high percentage of co-existing diseases.  With respect to disease research, when following this established cohort population, it is important to identify the biomarkers, modifiable and nonmodifiable factors, and to understand how mutations of the genes interact with the environment to cause diseases in the elderly.

The members of Dr. Qiu’s team share the same goal of working on pathological questions related to research in geriatric psychiatry. We also believe in making our lab a collegial, stimulating, and fun place to work.