The telomere is a repetitive DNA element that protects the ends of linear chromosomes. Mammalian telomeres are bound by a ribonucleoprotein cap consisting of the protein complex shelterin, and the telomere repeat containing RNA, TERRA.  Together the entire telomere complex functions to maintain genome stability.  However, each time a cell replicates and divides a small stretch of telomeric DNA is lost.  Telomeres that become critically short activate cell cycle checkpoints and promote the cellular senescence and/or apoptosis that drive organismal aging.  Thus, while checkpoint activation promotes aging, it serves as a barrier to the development of cancer.  In cancer cells, the genes governing checkpoint activation are often and as a result, critically short telomeres fail to induce cell cycle arrest.  These eroded telomeres are then recognized as substrates for DNA damage repair, stimulating the genomic instability that drives cancer progression.  Therefore, the Laboratory of Genome instability and Cancer therapeutics is interested in understanding how normal telomeres are maintained, how dysfunctional telomeres arise, and how defects in this process contribute to the onset of cancer.  Current projects in the lab are aimed at understanding the following; 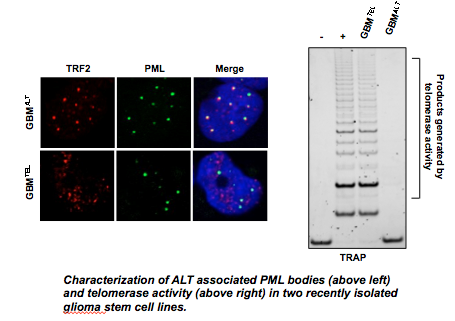